For those of you who follow me on this blog, you may not know that I’m a train and history buff.  Ever since a kid, I’ve been fascinated with trains and the local history that surrounds them.  Spent many hours at the Illinois Railway Museum and even a few years volunteering.

Most train buffs are fans because they grew up around a particular train line with fond memories of operating trains.   I wish I had that connection but for the small town that I grew up in, the only railroad tracks to ever exist were converted into a bike path when I was just a baby.

Not going to lie, I’m a bit jealous when I hear stories of how someone grew up along a busy train interchange or something similar. It was to my surprise when I visited a small railway museum in Ohio I would find a piece of railroad history from Carpentersville sitting in suburban Cleveland.  Albeit a piece of history that dates way before my time in C’ville, after reading the museum placard it was like meeting someone new and finding a common interest.

After a bit of research, I found that at one point the railroads and interurban rail service played a huge role in the formation and early growth of Carpentersville, Illinois. Freight railroads such as the Chicago & Northwestern (C&NW) serviced local industries such as Star Manufacturing (Now Otto Engineering) and Haeger Potteries, which produced bricks that would be used to rebuild Chicago after the Great Chicago Fire. These industries required workers and those workers used trains as a way to commute to their jobs very much how we use mass transport today. The Chicagoland area was blanketed by local interurban service that connected communities by transporting passengers, mail and small freight.  Several Interurban routes would pop up along the Fox River Valley until the Great Depression and then really bite the dust when automobiles would drive them into bankruptcy.    (Pun intended)

Long before my time in C’ville, there was a small interurban railroad that serviced Carpentersville, Dundee, Elgin and further south to Aurora.  The Aurora, Elgin, and Fox River Electric Company (AE&FRE) ran service up until 1935 and allowed for passengers to commute between communities and transfer to larger railroads for service to Downtown Chicago on either the Milwaukee Road in Elgin or C&NW out of Geneva, etc.

While trains are known for transporting people over long distances, it was to my surprise when I found one of those AE&FRE interurbans about 400 miles from “home”.

Stored away at the Northern Ohio Railway Museum was AE&FRE Car #303, which was sold to the Cleveland Interurban Railroad in 1935 and would be rebranded into their paint and color scheme and used for light duty service on the Shaker Heights Branch.   While this might not seem like a big deal to most, to me it’s an important piece of Fox River Valley history and I wanted to share it on this post to capture a lost relic in Ohio.  Probably not going to ever make it back to Carpentersville, but at least I know it’s being restored and protected by the museum volunteers. 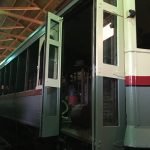 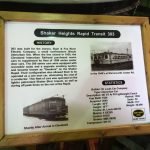 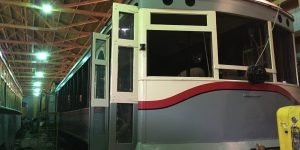 Update:  Now I’m on the hunt, found that sister car #304 was formally part of the Fox River Trolly Museum collection but was also sold to a real estate developer in Cleveland and then auction off again after a failed attempt to start a new museum.  Looks like car #306 is under restoration at IRM.

Update 2: Car 304 is back at the FR Trolly Museum. I’ll have to get out there this summer to take a ride.