I can’t believe I’m writing this but the Chicago Cubs are World Series Champions, ending a 108-year drought.  It was a brutal series against the very capable Cleveland Indians (And with mixed emotions with extended family in Ohio) but the Cubs won Game 7 by one run.

I know that everyone in Chicago has a similar story but I come from a long line of Cubs fans.  I was told my Mother’s father watched every game. I know my Uncles and my Father would have wanted to witness this.

Several great memories of being with family at Wrigley Field.

I remember being at Wrigley Field when I was pretty young to experience our first “Night Game”.

More recently, taking my nephew, Justin, to his first Cubs game in bleacher seats shortly after I had moved back into the city.

Cubbie Blue runs in my blood and I’m excited to finally say that we had GOOD LUCK THIS YEAR.

Wish I had some type of advice or realization that I could tie into this post.  I’m just happy.  Think I will leave it at that. 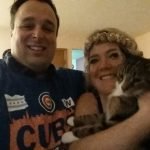 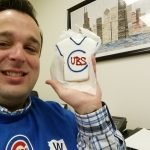