On October 13, I had the honor to guest lecture at Northern Illinois University as part of the annual Dr. Albert Walker lecture series. I didn’t have the opportunity to learn directly from Dr. Walker because our paths wouldn’t quite cross but his legacy within the department would impact me very much. Dr. Walker established the NIU public relations sequence in 1968 and was the founder and advisor to the NIU Betsy Ann Plank PRSSA Chapter where I gained some of my very first PR experiences. Dr. Walker passed away in 2010 and it was with honor to speak under his tutelage to a group of distinguished alumni and current PR students.

It is quite a fitting year for a speech, it’s been 10-years since I graduated and started as a PR intern. It was fun to reminisce while I prepared for the lecture on my career, it also made me realize how technology has changed a decade into the business. Not just within the PR, but how we communicate as humans.

This makes me feel “old” but when I started working in PR we faxed press materials, most students today will probably never use one. My first “grown up” cell phone was a Blackberry 7100i, so cool at the time yet quite archaic today.  I joked that back in my day we had cameras that were not also phones.  Most importantly, we chased gatekeepers by pitching stories to journalists and worked our tails off getting our clients in the news. 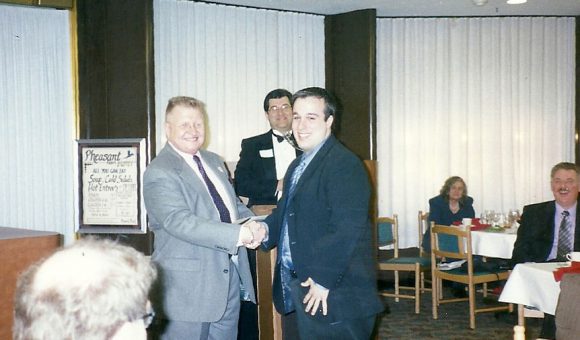 My PR Professor, Dr. Walter Atkinson, during the Journalism Banquet Awards. May 2006. Photo courtesy of my Mom. 🙂

Dr. Atkinson, my PR professor, lectured on many significant tactics during my time in PR school but I often remember talking about gatekeepers and public trust.  We learned by utilizing the gatekeepers, a.k.a the press, you could disseminate information and goodwill about your organization or brand to the public. The gatekeepers could also ruin your public image and our job would be to stop that at all costs to protect our client’s image and reputation.

In 2006, gatekeepers were primarily print and broadcast journalists.

The “gatekeeper” model worked for decades, especially for the business of news reporting. In the 20th-century journalists and media outlets, in general, were very trustworthy.  A positive story, or even mention, on the 10 p.m. news was extremely more valuable – and trustworthy – than a 30-second commercial. Before the Web and mobile devices, it was safe to assume consumers actively listened to the newscast and potentially dismissed the commercials because they were just advertisements. That is how we would value public relations strategy for many years and still do in ways.

Today, we live in a multi-device world where news and TV, in general, vie for attention. Studies have shown that consumers actively use multiple devices at once. These mediums are not just the competing for attention. More likely, if they’re not watching TV consumers are getting their news and information from other trusted sources outside of the traditional press.

The rise and eventual dominance of the Web.

The rise of the Web and mobile devices created other problems for journalism and, consequently, the PR business. Since the Web created virtually unlimited competition to “traditional” journalism, some media outlets would eventually shrink in size and capacity, others folded or gobbled up into news conglomerates.

During this time of uncertainty and rebranding, “strategic business positioning” would lead some media outlets to adopt sensationalized linkbait content and sell political bias. Ultimately, leading to decreased level of trust among consumers compared to prior decades.

The Web was a threat to the print journalism business since day one but it wasn’t really the Web that did them in.  In fact, the Web in many ways enhanced engagement for the media business.  What would become the breaking point was the rise of tools that made it simple to share and publish content to the Web combined with changing consumer behaviors.

A shift in trust, the rise of the influencer.

As access to the Web increased and user-generated content became more mainstream through social media and blogging, the rise of the influencers took the stage.  Equipped with their own communities of users and followers “influencers” disseminate messages to their following in ways only the gatekeepers could do prior to social media.  The mainstream media was challenged even further as bloggers and content creators gained traction in the trust equation. Public relations naturally shifted from chasing journalists to influencers and today a solid strategy falls somewhere between leveraging influencers and building your own brand influence.

I’m not suggesting bloggers and content creators should be trusted carte blanche. Rather consumers have a choice on where they are going to invest their trust. In many ways, the need to teach journalism ethics and best practices are greater than ever as user-generated content continues to explode and consumers begin to invest their trust in new places.

The Web and user-generated content also shifted the PR business in new ways. For the first time, PR could essentially bypass the whole gatekeeper/influencer scenario and build an audience directly with social media, blogging, and content creation. With the web, it has never been easier for brands and organizations to speak directly to their audiences. Social media, email marketing, and tools like WordPress have opened up a whole new marketing and PR channel referred to as Brand Journalism. Literally, the organization building their own media outlet to attract readers and build influence within their space. Therefore, great PR people today are also online community builders and potentially even Web influencers of their own.

A point I wanted to make to the students coming into the field.  Explore opportunities to find and build your own voice on the Web. These skills are often only learned through doing and something that can help them position brands in the future.  Don’t ignore trust. Your followers are likely only following you because they trust you and fellow members in the community. Straying away from trustworthy practices will only lead to a degraded brand image and eventual loss of community. It’s in your best interest to work with the highest level of integrity when building community.

Change is the only consistent thing in this business.

The advent of user-generated content and speaking directly to your audience also brings new challenges. The ease of building communities on gated and controlled networks such as Facebook and LinkedIn have brought new opportunities but I’m afraid at a rather large cost.  Facilitating community on social networks is simply bringing back the gatekeeper scenario and, after much experimentation myself, I’m looking at ways to incorporate community off of these platforms. Don’t get me wrong, I’m not abandoning them. There are many strategies for using social networks but I would rather work towards building something I own and control and outside of the pay-for-play.

Building your own community outside of an established social network has many challenges and costs and is not the easy route. If done correctly, it could provide a significant long-term return on investment that yet again removes the gatekeeper scenario. It also establishes a platform for new community influencers that can position your brand and open new trust channels.

Reviewing the last 10-year of the PR business has really opened my eyes to new strategies and tactics but it was easy to identify one thing that remains the same.

It is something you simply can’t buy or “boost”, it must be earned and maintained or you will lose it faster than you earned it.